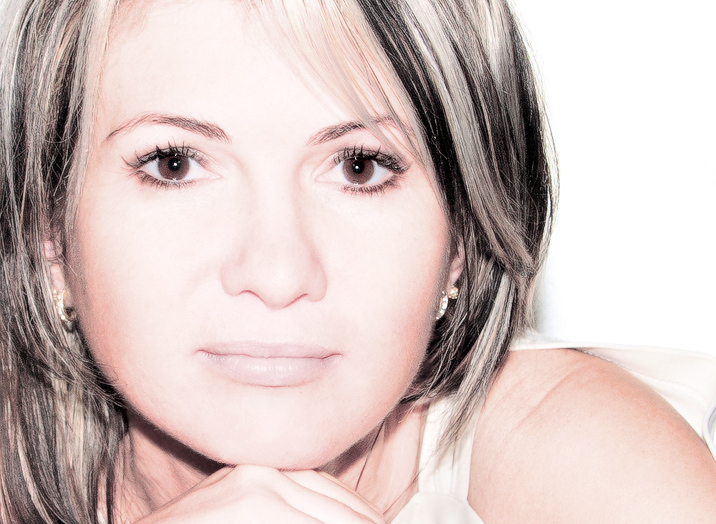 We gave a couple of portraits to Balázs who gave his opinions in return. It looks like the two pictures share something – a certain insecurity in composition. The hands, fingers of the poor subjects fell victim to mutilation by picture edges. We got our fair share of criticism for that. 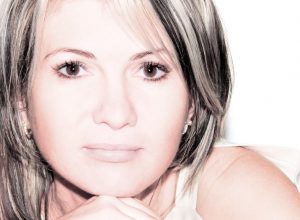 …who could not believe she’s pretty at all! So the photographer edited this picture and whitened the face which should be a pale gray instead!

Well, some photographers are like that! They don’t tell “Darling, you’re beautiful!” but click around in Photoshop instead.

On the positive side, the face is slightly off-center to the left, and the composition boldly focuses just on the face. It is a matter of opinion of course, but it is edifying to think through whether you should show less of the forehead. For instance, the picture can be cropped even just above the eyebrows! If so, do you also need the hand? Think it over and try different takes! If you look at the picture through squinted eyes, you can often spot the dominating element and decide what’s important and what’s annoying. Don’t be afraid to crop unnecessary parts! 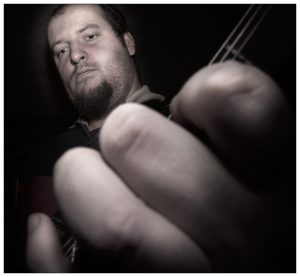 I cannot tell what makes a picture very funny while looking pretty everyday. I don’t mean laughable or jesting, just funny in an amiable way. There’s some genuine calling in the way this musician looks at his guitar. I can see it is earnest but still cannot think of this as a gravely serious situation. And this makes me feel like smiling!
But you should pay attention to one thing. If you view yourself into the picture very much, that is, you cannot detach yourself from your own photo, then you cannot spot the awkwardness in the loftiest, most serious or even the most tragical thing, because you’re so involved with your own interpretation. This is a bit like love which makes you blind: somewhere deep I know the beloved one is a bit ugly and dumb, making a fool of me on top of it all, but still I cannot see them as they are.

Why do I say this?
Because serious can easily turn into ridiculous, funny into miserable, tragical into comical, and instead of being overwhelmed, you sometimes start to laugh in embarrassment.

And this is because the fingers of our guitarist are not all visible! If I were a musician, I could tell this is due to the chord he’s fingering, but I’m a photographer and may not be aware of the reason. But the visibility problem is still there. Well, if this was a chords book, I’d be happy about finding photos in it as illustrations, but at the same time I’d be annoyed about the fingers not being clearly visible on the strings. But now I’d rather say, jokes put aside, that I have the uneasy feeling that he’s missing some fingers and strives hard to play his instrument. (I have seen such a thing and it was not very pleasing.)

You can say, of course, that if this was a full-figure photo, I wouldn’t even notice this, and also that it is virtually impossible to make a good photo about someone playing the guitar, showing all the fingers and having good lights, and so on, and so on.

My point is that if you’re taking such a fine and boldly composed picture, pay attention to such small but important things as well! Pretty please!