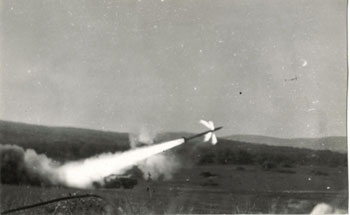 “I have taken this photo during my military duty years, with a primitive camera. It would be nice to have a sharper picture, with some zooming. Perhaps a little coloring wouldn’t hurt either.” 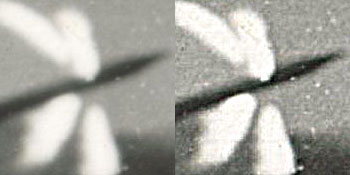 Just like the fairy in the tale, we can only grant you half of your wish. This time, it is coloring the photo.

In the photo we received, the focus is somewhere on the tiny flowers in the foreground, but the whole of the picture is strongly blurred. With today’s photo editing technology, there isn’t a tool that could conjure details onto a picture lacking them. Sharpening increases the contrast on the borders of areas with a certain lightness. Thus, it produces contrasty edges but that would only give us blots with sharp edges instead of blots with blurred ones. And a huge amount of noise as garnishing. You can see this clearly on the picture above. There are no new details, we cannot see the script on the side of the rocket (if any), flames don’t look more detailed. Contrast did increase, although along with noise, and the blot-like effect remained as well. Sharpening should provide the illusion of detailedness, which is impossible with this photo. The magic you sometimes see in movies—like identifying a car’s license plate from half a mile based on a blurred CCTV image—is, well, quite an exaggeration. Still, reducing image size can be an effective trick, which does provide the illusion of detailedness. At least, when compared to the original.

Most of the scratches and dirt can be removed quite effectively. You can read more about it in a recent request . The procedure is similar again. We removed the annoying freckles mainly with Filter/Noise/Dust&Scratches, and then applied a Healing Brush to repair major scratches, defects and remove a few irritating elements—an intruding rock(?), a metal cable(?)—from the foreground. 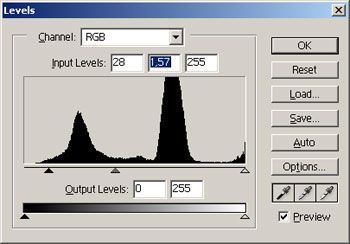 The next move is the preliminary enhancement of brightness and contrast. We used Image/Adjustments/Levels for this. The above illustration shows the values used. The black triangle representing the lightness of black tones was dragged to the right, increasing the saturation of black areas. On the other hand, the grey triangle representing midtones was moved towards the left, in order to give some brightness to the whole photo. 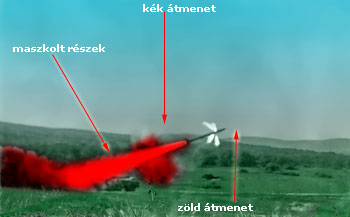 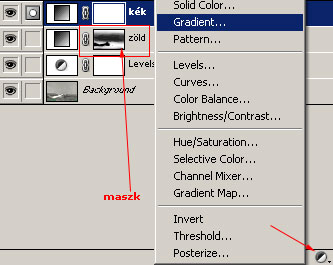 After all these preparations, we started to color the photo. We had a pretty easy job to do, as the two main color had to be the green of the grass and the foliage at the bottom and the blue of the sky above. The simplest method was to create a Gradient transition layer on the Layers palette. The red arrow at the bottom shows the icon for the menu containing the Gradient command. On the appearing dialog, we first created a transition from grass green to no color, which we then copied onto the photo using the Gradient Tool (press G). This way, the lower part of the image got a green surface with an upward decreasing intensity. The blending mode of the layers has been set to Color from Normal, so that the green color infuses the previously grey areas. As certain areas—such as the smoke and flames of the rocket—that shouldn’t have done so got green as well, we clicked the layer mask image displayed on the right side of the transition layer, and used a simple brush to mask out all areas that didn’t need any green. Using a lower opacity value in the menu on the top enables you to clear all the unwanted verdancy much more finely.

The coloring of sky required us to repeat the above procedure. This time, we used the Gradient tool to apply a transition from sky blue to no color, stretching from the top of the picture to the middle. As the blue color fills the upper regions of the photo rather homogeneously, we didn’t need to do any masking in this step. 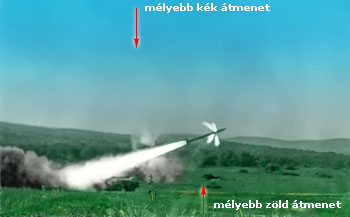 Because of the phenomenon called aerial perspective, objects in the foreground always sport a more vivid color. In an attempt to mimic this effect, we repeated the two above steps again. Now we chose a green transition with a slightly more yellowish, vivid hue and applied it to the lower fifth of the image to provide a livelier coloration to the plants in the foreground. The depth of the sky was enhanced with a deeper blue transition on the upper fourth of the photo. This made the color of the sky more realistic. 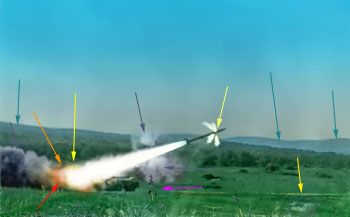 The final stage of coloring was to apply colors to the smaller objects in the picture.

We chose arbitrary colors for them, guessing for the probable original ones. We applied them with a smaller soft brush. You should use a different layer for each color. This is how we applied the imaginary purple of the flowers in the foreground, the greyish blue of smoke, the greenish blue of the remote hills and the reds and yellows of the flames. There are no all-round instructions for this stage. You only need a bit of dexterity and some imagination. The more fine color layers you apply, the more realistic effect you can achieve. Obviously, we cannot spend a week detailing it in this article, so we painted only the more important elements. Use the Color blending mode for the layers. 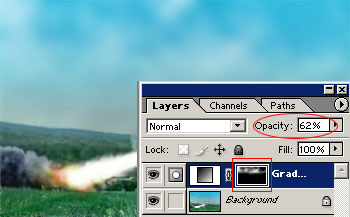 Finally, we conjured a few wisps of clouds upon the sky. We used a white color gradient for this, similar to those discussed above. Then, just like with the first green layer, we switched to the mask layer and used Filter/Render/Clouds to produce clouds. As the colors now covered the whole of the picture, we used a large soft brush to remove them from the landscape and the other areas where they were unwanted, and decreased Opacity to make the remaining ones look softer.

This is the time for reducing size, too. Click Image/Image Size. 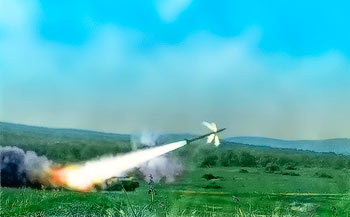