The name of Photoshop’s Fade feature may sound a bit misleading&#8212;you may first think of the fading of colors or tones in a picture. Well, this is something the feature can do, but actually it is for controlling the strength and blending of an earlier editing action. In many cases, it can substitute for the duplication of the background layer and the setting of blending mode and opacity of the layers. How is it done? After applying a filter (e.g. sharpening) or a correction action (e.g. lightening) on your picture, you can weaken the effect using Fade, and you can even set a separate blending mode for it. It may seem complicated, but in fact it isn’t. Here’s an easy example for you.

Step 1: Open the photo in Photoshop 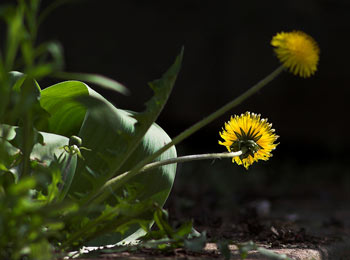 Let’s apply a filter to this picture. In this case, it doesn’t matter which filter you choose. Say, let’s pick Unsharp Mask. 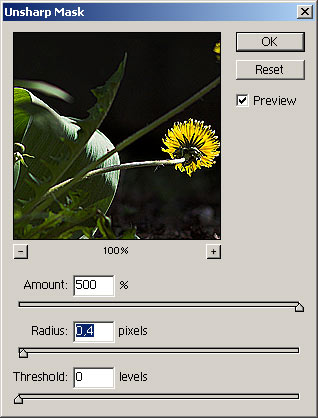 Click Filter/Sharpen/Unsharp Mask and set a sharpening effect. Compared to the size and detailedness of the picture, we chose a rather strong sharpening. In the preview image, there is a clearly visible light edge (“halo”) around the edges which gives the picture an annoyingly high contrast. Yes, this is severe over-sharpening. It’s time to put things right. Fade will be a perfect tool for this purpose. 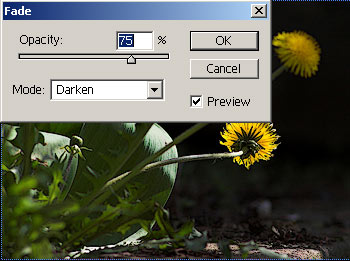 Click Edit/Fade to invoke the feature. Fade offers two choices. Opacity works just like when you specify opacity values for layers. It can be used to gradually weaken or even eliminate the previous effect. Mode controls the blending mode of the original and the effect, in this case, sharpening. Once again, it works just like using two separate layers.

Set Mode to Darken to get rid of the halo produced by the over-sharpening but retain the dark edges. As the photo is rather dark, the latter won’t be annoying—they will indeed increase the feeling of sharpness. If you find the effect too strong, you can weaken it using Opacity. We used a value of 75%.

Step 4: The halo is gone 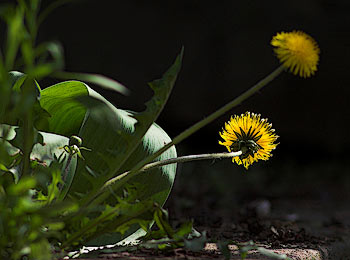 The result is a sharper picture without the unwanted light contours.

But this is just one aspect of Fade. Feel free to try it for weakening the strength of any editing step or applying a blending mode. It can be a very powerful editing tool when used in combinations of multiple steps. Stay tuned, we’ll get back to it soon.