Our immediate surroundings offer an obvious and convenient photographic theme. A bouquet of flowers in a vase, bathed in the morning light, or a portrait of our favorite dog, with a curious look… Of course, Balázs Turay has a merciless opinion about these pictures as well. 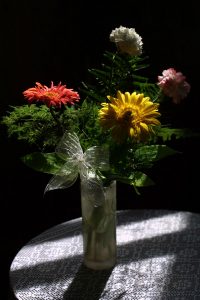 I wonder why anyone shoots flowers? Why does it feel good to take pictures of flowers in a room, or outside, in nature?

I’d love to know the answer, since I don’t feel the beauty of the photo or the photographed object to be a sufficient reason.

Of course I may be approaching my own question from a wrong side, which means I’ll come to a silly conclusion, or—even worse—I’ll think someone else to be silly!

Or, as a third solution, I can leave photo reviews to hell—why should I be struggling with other people’s pictures?

First of all, because, well, I may not be starting to shoot flowers, meadows or beetles, but the efforts I put into finding an answer can let me peek into someone else’s head or soul! This could be interesting as it can make me understand something I could never grasp just by talking or through a nodding acquaintance!

When I were in China, I was astonished by the sight of so many people in the parks, photographing the trees in bloom. Of course at first it seemed ridiculous when about eight men and women in business suits, holding digicams with huge tele lenses, or just simple mobile phones, surrounded a small tree covered entirely in mauve-colored blossoms. The movement is funny, too. I raise the camera, compose the image (which pretty much looks like waving with the phone), and click. Check the display, save the picture, evaluate with friends and relatives, and compose again.

Spending a whole week in Beijing would have not brought me closer to understanding them. I would have only seen the nice and well-known parts of the city, always full of tourists and merchandise stalls, so suitable for taking a photo and going on…

By roving the city did I understand how great joy it is to have something of color and beauty for the people living in back alleys and barren block of flats behind the noisy, crowded streets, the six-to-eight-lane boulevards, under multilevel highways. You can see plants in the windows, but the room is often not enough even for the people themselves, or the air is so bad that these nice, extraordinary trees could not take it. The camera of a cell phone, or a large “tele” can bring something closer to those who may only go to parks for visiting—in Beijing, you are not allowed to lie on the lawn and stare at the sky, as you’d do in Central Park or St James’s.

The other reason for taking a picture is something that takes even further than this joyful, real-or-virtual gathering of flowers. Now, not only the success of the capture, the finding of the beauty is important. The goal, and the determination behind, is completely different: to create a reality, which, although connected to the original in multiple ways, and often keeping its original meaning, steps over it, and uses different laws for a different function. If you walk with open eyes in the world, you can call yourself an observer. But if you encounter a picture, you’ll be a viewer. You expect one thing from a botanical excursion, where the words of Gerald Durrell are supposedly echoing in your mind, and another experience when visiting a photo exhibition, or surfing the web for photos.

For the (photographic) picture does not need to conform to reality. It has its own rules. To seek an appropriate example: a Japanese garden gets composed using a similarly strict logic as a picture does. Composition is the process of placing the elements. Where to put this, what’s its ratio to the picture field, how is it related to the frame and the other elements? What’s the picture about? A blade of grass? A multitude of grass? The throng of grasses, reeds and sedges? How these look in a picture when dancing in the wind? The pathways cut into the fields of reed? Is this all sharp or not? Blurred or frozen?

One important question is what you’re raising from the world.

The other is how you’re doing this. By thinking about these, you can continuously strive to answer the why’s. I don’t want to confuse anyone, but the latter is often much more important than those two!

I don’t know if the person who took this photo wanted to preserve something or the intensive colors woken by the lights on the flowers mesmerized them. But it’s clear that they have started out on a road whose ending is not known. Two pictures by two artists come to my mind. One is “Chez Mondrian” by André Kertész, taken in Paris, 1926, and some of Karl Blossfeldt’s plant studies. Be sure to search the web for these names!

There are pictures which are dear to us. These are either photos you cannot tell why you like (“just because”), or ones which show something/someone you love. In this case, the over- and underexposed, unwillingly de-composed views of acquaintances (mostly children) with arms and legs cropped, invisible in backlight, can make ladies cry out in joy, and images of lovers long gone make men moan feebly.

In either case, the success of the photo does not depend on photographic beauty, fine composition, or range of hues, but on instinctively invoking an emotion. Oh yes, this uselessly faded picture was taken when… and this blurred, dark one, uninteresting to anybody, when…

This is how I feel when looking at this cute dog face—since for me, it cannot even recall the memories of a slobbery introduction. The photo doesn’t go further than this indeed: it impictures something—from the master’s viewpoint, obviously, the most typical and amiable gaze.

And I am left here wondering whether I can or should give advice about dog faces, or do these pictures really come to life due solely to the inner compulsion and joy of perpetuation? There are those who take pictures of their beloved, and some collect photos of their favorite cars, and carry these pics around in their wallets.