In the second episode of our photo review series, Balázs Turay was handed another two photos for a short summary of first impressions. Balázs was once again true to himself and shared his thoughts in his distinct style. Here they are for you to read. 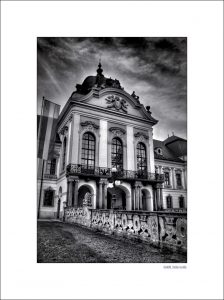 …in the storm, under dramatic clouds and a blackened welkin. This makes the sky look even heavier and more powerful. Its tones fit the facade and the small stones on the earth, the grass and the stone balustrade. Thus, every element shown to us by the author concentrates into a unified composition. I’ll share a secret with you, but first, inspect the picture carefully, and ask yourself: does the sky look dramatic, the facade vibrant, can you feel the wind, the approaching storm?

And the flag? It barely moves. Beware, the author’s cheating. He creates an illusion, a storm into silence, drama into boredom. It’s just a facade. We’ve seen it plenty of times. Still, the sky, the clouds! The rest I’ve already told. 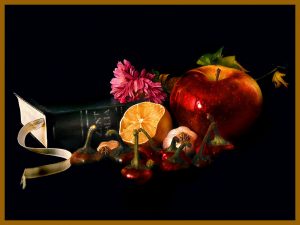 Is it a painting or a photograph? Is it reality or imitation? The tedious work of mixing paints and doing the ground coating, or a few clicks of the mouse and smart filtering? As you can see, the photo’s an illusion. Now it has taken up the disguise of a painting. It has taken over its form, color, mood and general expression. Remember that the photographer, no matter how you call her, doesn’t need to know how to paint! Or does she? What’s her purpose? For instance, to change as a chameleon, to make the illusion as authentic as possible! To tell stories, make a prank, or teach us to view the world in different ways. This time, the illusion is perfect. Too perfect, I’m afraid. Perfect so much that it no longer feels like an illusion and doesn’t allow any doubt. I believe that she learned to paint. The thought of this being a photo doesn’t even come into my mind. Or, more exactly, curiosity doesn’t drive me to learn whether I see a painting or a photograph. It’s all the same. I can believe both. I can see she’s mastered her trade anyway. But I like to have something to think about, so I’d like this picture to want me to have doubts whether it’s true or not, a painting or a photo. I’d like it not just to illustrate but to tell me, “Listen, I’ll tell you a story, I’ll enchant you, take up this disguise today, and still I’ll remain myself. It’s up to you how much you believe!” I can see a painting. I don’t know who painted it and why. I cannot get close to it as the author only allows me to decide whether I like it or not!