I had to pull up my socks when I said yes to András Perneczky’s request to take over the photo review column of Balázs Turay. Having read through his writings I had to realize that I should follow the footsteps of a photographer with good writing skills, sensitive eyes and who is rather at home in arts. I will try my best to act so that visitors to this site do not have a sense of missing something on top of a different voice.

The first bunch of photos comes from the same author. It is evident at first sight that the selection is quite diverse in topic, which is a compliment for a beginner, since I am also of the opinion that it is essential for practice to take the attitude “Take a photo of everything”. The collection covers quite a wide scale regarding both technique and aesthetics, containing remarkable and forgettable images as well. The eight pictures can be divided into four pairs on the basis of their topic or technique, and so I will also take a deeper look at them in pairs too. 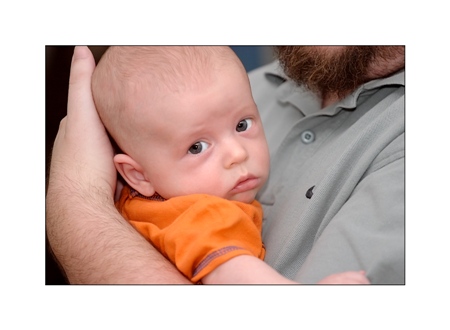 The author sent in a family portrait and a single portrait from the field of human portrayal.

A little child is always a rewarding topic: few people would not be moved to tears at their sight. Therefore a photographer always has to be very sensitive of this topic, even the “product” remains within the family. The emotional effect of the topic itself is the carpet under which a shallow photographer tends to sweep all the frippery. Problem is, though, that the smallest of these can stick out of the carpet quite visibly. Well, this photo can only boast –beside the topic- with its good technique, in other words the nice lighting and harmonious tone balance, which suit the topic very well. Composition and the recorded instant, however, are far from the expected minimum.

Landscape page layout is without a reason here, all the more so because only the (bearded) chin can be seen of the man holding the baby. You may not crop a face this way, especially when it is an inherent part of the photo, since it is the “head” of the hands and body holding the kids. And if it happens to be the proud father, his soft eyes directed at his son could add a lot to this picture. The limbs cropped this way or the other framing the image further increase the disturbing effect, just like the badly chosen moment of recording. It doesn’t matter whether the exposition button was pushed at the wrong time or it is a wrong choice from a series of images. It doesn’t matter if the baby is tired of the process or is sleepy anyways and would prefer to turn in now. Maybe they should have waited until he rests his little head on the chest of the man, as that position would have surely put a more contented expression on the child’s face and a more idyllic atmosphere to the picture. This photo is just a record that is worth showing to family members only. 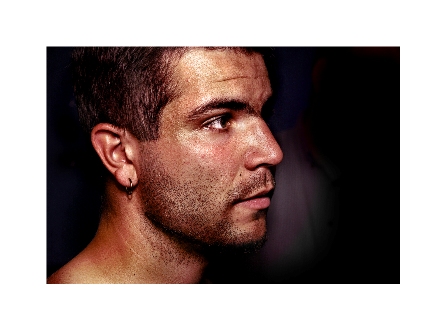 The portrait displaying a young characteristic face is much more remarkable. The horizontal layout is not annoying here, and neither is the top of head that’s been cut off. There’s sufficient space before the eyes, which shows the direction of the attention mentioned in the title, while its topic is trusted to our imagination. Lighting is a bit harder than it should be, which does good to the texture of skin and the stub, but the highlights glittering on the skin are not the best. This can be corrected in the photo editing program afterwards and it is worth doing it, this picture is worth it. What you always need to pay attention to is whether you want to display a profile or not. The only problem in this photo that the head poise is inbetween the two. Since the further away eyebrow arch is visible too, an angle would have been better where the other eye also appears, or otherwise a full profile.

Portrait is usually a black-and-white genre, leaving the colors is seldom justified. I have the feeling that the atmosphere and effect of this picture could be enhanced in a sharp black-and-white version. All in all, this is one of the remarkable pictures of the collection, this is of one the roads the author should walk.