The photos we received from Szilvia Valentin are sharing a main theme but are very different at the same time. We passed on these concert photos to Balázs Turay to hear if he has to say something about them. We used these very words: “Do you have something to say about them?” 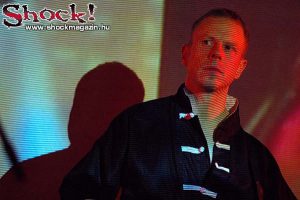 If you decide to take on concert photography, if is almost all the same for the your future audience if you’re doing it for money or as a pastime.

Your viewers don’t care why they don’t get to know what instrument this guy plays. Provided, of course, that he plays an instrument and does not fiddle with a computer. A gig photo not only reports that certain moment. In a fortunate case, it also tells about the relation of the person and their instrument, their peers, the audience—in brief, it tries to show something essential about them. Of course I understand that this picture is about the lights reflecting from the face and the wall, and about shadows, but in this case, I’d be much more interested in a more subjective cropping, primarily containing the face, and the lights and shadows behind it. Use a paper frame, scissors, a ruler, or whatever software tool you fancy, and try narrowing the picture!

Less would tell me more this time. 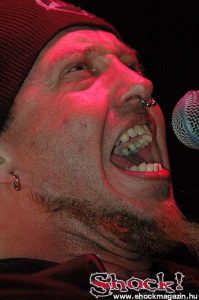 I love narrow croppings. They direct your attention very effectively, to things you want to show. Well, and also to things you don’t.

Every photo that depicts strong human emotions faces the danger that the waves of emotions will move from tragedy to comedy, from heavy to light. The wrinkles and colored lights create an atmosphere, and it is up to just us to choose a cropping and select the instant in which we push the exposure button. It is also up to us to choose exposure time and auxiliary lights. If this wrinkled, raging face gets a bit of motion blur, maybe you can concentrate better on the emotion than in the case of using a slight fill light, when my dentist’s voice comes to my mind saying “upper left lateral incisor, filling, premolars OK…” 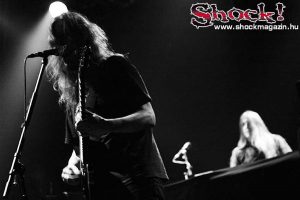 A classic diagonal composition. My eyes like this picture a lot. It is nice as the horizon is skewing (!) to the left, but the lights (the spotlight and the lit face) are countering it. And another thing about the lights: the halo surrounding the figure on the left looks good, too. The figure is nicely complemented by the mic stand, and your gaze is directed seamlessly by the light on the synth’s (?) edge towards the figure in the back. But you should notice something strange. Who are these two men? Surely, there are people who recognize them in such a blur, or even in backlight. But I think the majority won’t. So, if I think it through, I distribute sharpness differently across the picture. The other, presently blurred, figure will still emphasize this, he will indeed get more attention since he’s in the light, and he’s the one we will have made recognizable using focus. Because now they are juxtaposed, which, in itself, would not present a compositional flaw. My only problem is that we don’t know who are the people in this well-composed and well-shot photo.