The faithful readers of our Photoshop articles are likely to remember the procedures we introduced for red eye removal. PS had lacked an automated solution for this problem for a long time, but we have to admit that manual treatment brings better results most of the time. But what about the users who don’t want to putter away for long minutes with every single red eye? They need a fully or semi-automatic remover tool. Newer Photoshop and Photoshop Elements versions already contain a response to their prayers. Now let’s see how the feature in Elements works. 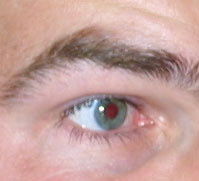 The problem is straight: Rabbit eyes, caused by a flash being too close to the camera lens. 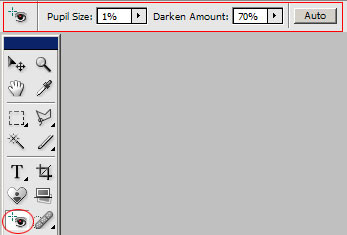 The newer versions of Photoshop Elements already contain a separate automatic Red Eye Removal Tool that can also be activated by pressing Y. The options row at the top of the workplace contains two fields and an Auto button. Click the latter to search and remove the red eye automatically. That is, if the program succeeds. Sometimes it doesn’t, so you have to take matters into your own hands. You simply have to click somewhere near the eye and drag a rectangle around it. When you release the mouse button, reddishness disappears in accordance with the specified values. The vales are:

Pupil Size, specifying the size of the pupil. This is the middle, preferably black area of the eye. In worse cases, reddish discoloration appears here. Darken Amount specifies the extent of darkening to be applied. 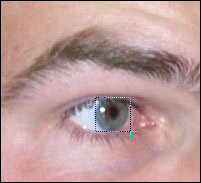 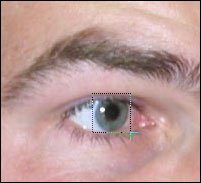 Here are a few examples for the proper setting of Pupil Size.
We have specified 1% as Pupil Size for the left picture, and dragged a marquee around the eye as described above. Only the middle part of the redness has vanished, the edges still show the effect, thus producing an even weirder, unearthly result. You should use such low values when the pupil is very small, or the red eye effect is only visible in its middle.

The right-side sample uses a much higher value of 65% that managed to eliminate all of the redness. You may even specify a slightly excessive pupil size that partly cuts into the iris. Overly large values, however, will damage the edge of the iris as well. Use a mid-range value first, and if you are unsatisfied, return to the previous state (press CTRL+Z) and increase or decrease the number as you see fit. 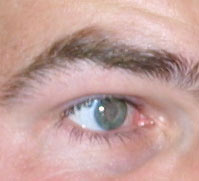 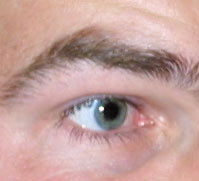 The above picture provides examples of extreme Darken Amount values.
The left photo uses a value of 1%. The redness is gone, however, the middle of the eye remains bleached. This is at least as much of a problem as a red eye.

The right-side sample uses a value increased to 100%, which turns out to be a bit excessive. It may do perfectly well if the photo contains a lot of black, but this particular picture is not very contrasty, so a very dark pupil sticks out heavily. Indeed, it loudly shouts, “I had a Red Eye Removal Tool treatment!” to the world. Once again, use a mid-range value first, undo any changes you don’t like and change the value in smaller steps.
Exorcised 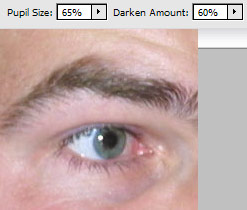 The final picture was prepared with a Pupil Size of 65%, and Darken Amount has been set to 60%. Redness has vanished, and the middle of the eye is appropriately dark, matching the contrast levels of the photo. Gone is the devil from the eye.