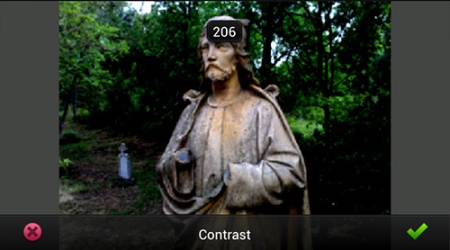 The first part of our series dealing with the free Adobe Photoshop Express Software introduced the first group of the image editing commands, which are to be launched with the first icon in the top commands row. This time we’ll be talking about the settings hiding under the second icon, which help us determine the followings in your photo: Exposure and Brightness, Saturation, Tint, Contrast, or you can simply make it black-and-white (Black & White). 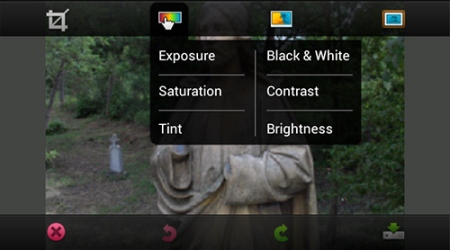 It’s used for defining exposure of the photo. The default value is 0, you can darken the picture till -64 or brighten it till +64. To achieve this, simply drag your finger across the screen to the left or right from the middle, as if you were shifting an invisible slider. It also works if you touch the screen left or right to the center. The further away, the stronger the effect is. 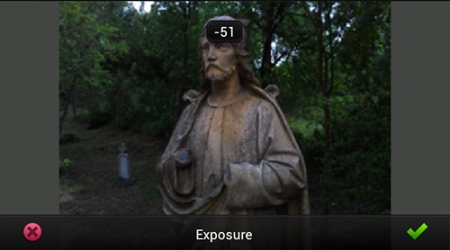 The value of brightening can be checked in the small window appearing at the top of the photo, but it is also there in the preview.

Color intensity can be increased or decreased using the previously described method, by shifting an imaginary slider. Here the base value (saturation value of our photo) is 10, but you can decrease this to 0 or increase to 100. It changes the tint of your photo.
A color scale will appear at the top of the photo with at least 40 units ranging from red, through yellow, green and blue to purple. Touch the scale anywhere and you’ll see the picture re-colored accordingly. Unfortunately it can only be a monochrome tint.

This is a black-and-white effect that can be reached by setting Saturation at 0 value as well, but here it takes only one move. You don’t have to change any settings, just use this command and the photo loses colors immediately. 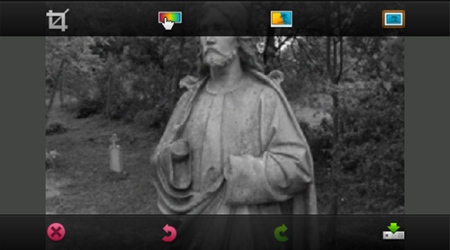 You can set here the contrast of the image, moving between the values 0 and 400, using the method described at Exposure. Default value is 96 here. Choose a lower value to decrease contrast and a bigger value to increase it.

It’s easily mixed up with Exposure command because this also affects brightness of the photo. The difference between the two is that Exposure influences the mid-tones mostly, and so the photo is less likely to burn out if its value is set high, and you can also achieve more significant darkening with it. Brightness, on the other hand, increases the lighter tones of the image, therefore if you increase its value, you can easily overachieve your aim.

The current brightness level starts with the value 25 in our photo, which can be darkened to 0 value and brightened to 100. 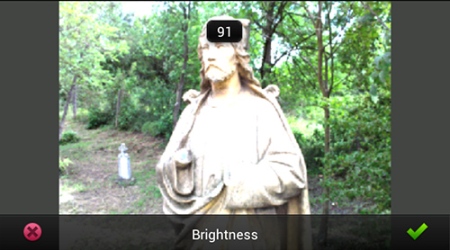 The third part of our series will describe the creative image effects and framing options of Adobe Photoshop Express.

Brightness and contrast II. in Photoshop